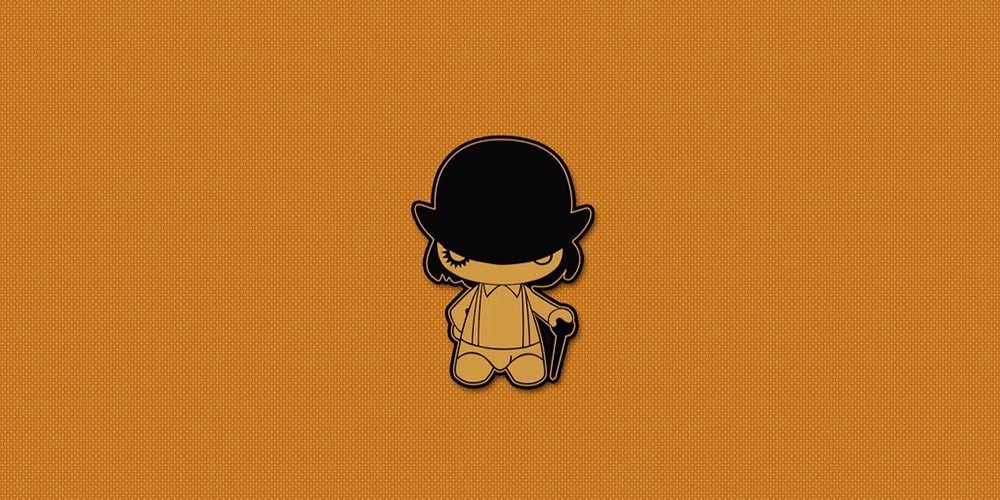 One of those perplexing terms you will almost certainly encounter at some point in your life.

I remember that when I first came across these two words I became utterly confused. I thought that people were discussing some weird and irrelevantly complex concept, so I reverted to one’s automatic response towards complexity – avoidance.

This happens a lot when we face novel or arcane terms and ideas. The path of least resistance consumes us and we are left in the same homeostatic state. That, however, doesn’t offer any particular reward or satisfaction. An undaunted thirst for knowledge, despite the difficulties that such an endeavor entails, is an essential parameter of a great life.

Every alien topic that we confront has an explanation; a sort of story that, once unraveled, can lead to momentous revelations.

I like to think of a novel term as a low-resolution image. The more you invest in refining it by understanding its underlying principles, the higher the resolution becomes.

The same idea applies to game theory. Despite its intimidating nature, I decided to scrutinize this topic. First to understand it properly and second to help you bring more strategy to your decision-making processes.

This time, however, things were more challenging than I thought.

After intense research and a careful evaluation of the parameters that comprise game theory, I hit a roadblock. The concept is so vast and its applications so diverse that it really needs to be studied in depth in order to become properly comprehensible.

Therefore, I decided to adopt a different approach. Instead of offering a deep scrutiny of the topic, I will become more practical and suggest some basic game theory axioms that can help you make better decisions. In particular, I will attempt to develop a game theory mindset that, once adopted, can influence decisions in most facets of our lives.

But first some history.

The main tenets of game theory have been postulated throughout history by various thinkers and in different ways, albeit without the provision of a unified framework.

Plato, for instance, in two of his texts, the Laches and the Symposium, explains how Socrates recalls an episode from the famous battle of Delium in 424 BC between the Athenians and the Boeotians [1]. The synopsis of his passage goes as follows: 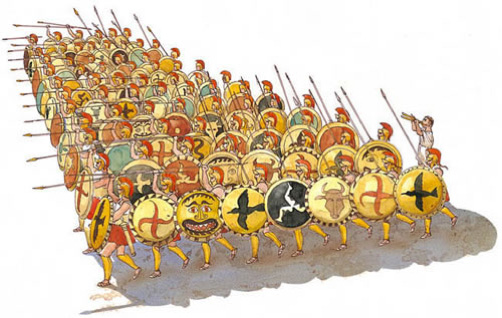 Based on this reasoning, it seems that the best alternative for the soldier is to run away regardless of who is going to win the battle.

Now imagine if all soldiers were to exhibit this very reasoning at the same time. If such an event would occur, they would all probably realize that they would be better off running away.

This seemingly simple yet incredibly reasonable hypothesis is one of the first historical instances of game theory in practice.

Later on, many famous thinkers and strategists contemplated similar ideas, but it wasn’t until 1944 that game theory was presented in its contemporary form. 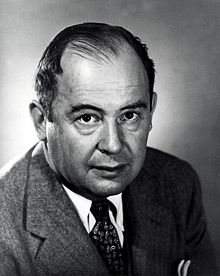 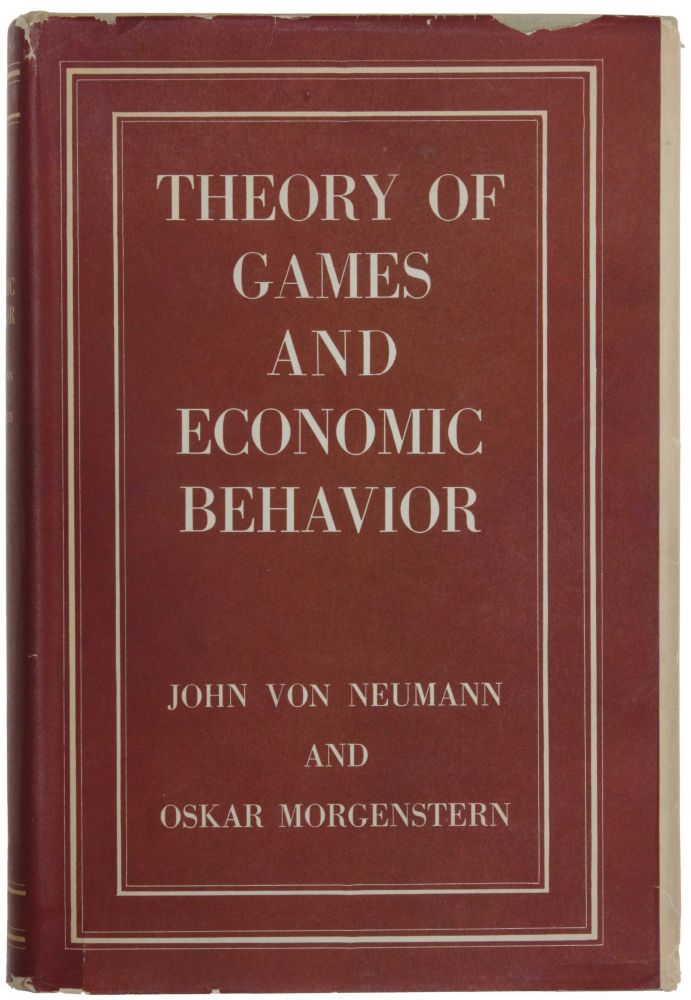 A zero sum game is a game where if the total gains of the participants are added up and the total losses are subtracted, they will sum to zero. Poker and gambling are popular examples of zero-sum games since the sum of the amounts won by some players equals the combined losses of the others.

During the following period, the focus of game theory was on cooperative games (a game is any interaction between individuals that involves certain rules and rewards) in order to propose strategies for groups of individuals who are willing to enforce cooperative agreements within games. 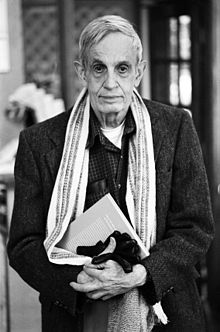 This great book popularized game theory as a concept, thus extending its application to fields like economics, politics, and sports and leading to the expansion of the array of scientists that showed interest in it. One of those scientists was the legendary John Nash who won the Nobel Memorial Prize in Economic Sciences in 1994 and formulated the Nash Equilibrium, which will be discussed in a bit.

Something very fundamental about game theory is that it doesn’t get its name from the preconceived notion of a game as we understand it:

A game in game theory is any interaction between multiple people in which each person’s payoff is affected by the decisions of others [2].

Namely, any single interaction you are part of can be analyzed with game theory in order to produce the most beneficial outcome.

But before we get into the mechanics, let’s lay out the main principles:

A skeptical person would automatically assume that these rules can’t be applied to real life since most people operate in a strictly emotional and irrational manner.

Consequently a very logical question arrises: Why would I even bother learning about game theory since the principle number two is usually violated?

Game theory is for elite-level game. When you operate at a simple and ordinary space, you will most probably not need it. 1

When you decide, however, voluntarily or involuntarily, to raise the stakes and compete or cooperate with successful and capable individuals, you can’t outperform them or forge alliances with them so simply. Most top performers and high-achievers are well informed and extremely competent in their field. They are well aware of the rules of the game they play, their decision-making is governed by rationality and they are motivated by self-interest.

Game theory might not account for most people, but if you want to enter elite-level game fields like business, academia, politics, or any other arena that includes strategic decision-making, game theory becomes paramount.

Due to the vastness and intense complexity of the subject, I will narrow my analysis to the three most encountered terms related to it – Prisoner’s Dilemma, Nash equilibrium, and dominant strategy.

Prisoner’s Dilemma is the most widely mentioned game in game theory. The basic premise is how to establish a mutually beneficial strategy between two members of a gang that got arrested and face potential imprisonment.

The following matrix depicts the different choices and each number signifies the number of years to serve according to each. 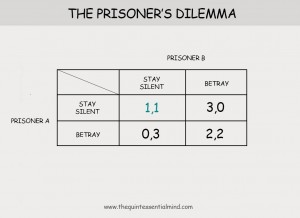 Prisoner’s Dilemma exemplifies to a great degree the substrate of human nature. The irrational self-interest driven gang member will most probably choose to betray his counterpart, thinking that he will get a better deal. This idiosyncratic choice will most certainly lead to a disaster for both parties since they will get the worst deal possible. The obvious, mutually beneficial choice here is to keep silent.

The main idea behind this game is to expose the inherent tendency of humans to display a lack of cooperation in this and similar games.

Game theorists usually coin the terms dominant strategy and Nash equilibrium to distinguish the kind of strategies followed by the players.

Those two terms are used usually together and form the basis upon which game theory is founded.

And here is where the term Nash equilibrium comes into play. The term is used since John Nash explained the essentiality of equilibrium in his landmark work – Equilibrium points in N-Person Games [5] .

In essence, what he proposed is that even in high-level competitive games (Google vs Apple, USA vs Russia etc.) there exist an “equilibrium” where no side would benefit by changing its course. At this equilibrium, each side knows its adversary very well and sticks to its strategy [6].

For instance, in the prisoner’s dilemma, the Nash Equilibrium is the upper left square of the matrix.

What makes Nash’s theory of equilibrium so special, is that it presupposes that in each game there is at least one point of equilibrium and all players will be better off trying to find it and form their strategy around it. This momentous revelation helped people in disciplines like politics, war, economics, business, and social theory understand the world better and form better strategies.

The inception of Nash equilibrium was portrayed exceptionally in the wonderful movie “A beautiful mind”:

Also, a great example of the game theory trifecta in practice is shown in this great episode of the game “Golden Balls” which was aired in the UK back in 2008.

The player on the right is either a genius or a big troll. He is definitely a nice guy because he didn’t exploit the other player’s choice, but, apart from that, his strategy seems incredibly optimal. By putting the other player up against the wall, and suggesting that he will steal, he achieves a very important goal:

He rules out the possibility of the other person stealing.

That is tremendous thinking. Now he knows that the other person either needs to trust him or he will lose everything. The final choice leaves everyone happy.

Even if people or companies rationally follow their own self-interest, the best outcome is hard to reach when they can’t or don’t cooperate.

Therefore, the best strategy is to continually scan the “market” 2 for potential alliances. People who can forge strong alliances will eventually become part of oligopolies and thus dominate their market. The rest will consequently be ostracized.

That’s what I love about game theory. It approaches the “game of life” from its most axiomatic principle, that of evolution. Evolution equals adaptation and therefore life is an omnipresent game of adaptation.

Humans thrive in cooperation because it is the main strategy that helped us survive and thrive after years of adversity and struggle to compete against different forces in nature.

The sad thing is that after establishing our dominant strategy, we overpowered other species and, on most occasions, nature itself, but eventually we turned ourselves against each other.

There are a variety of factors that affect the descent to the point we have reached, but a game theory mindset can work to our advantage.

I always believed that change and equilibrium start at the micro-level. And that is something we fail to grasp because we are usually consumed by events at the macro. It is interesting to be in the know and discuss and argue about politics and national strategies, but at the end of the day, the trigger is pulled by the respective strategists.

What each of us could do instead is to use game theory in our most challenging decisions and in our closest relationships. Regardless of what decision you have made and how this will impact your future, think like a game theorist.

You can actually create a sample checklist and evaluate the relationship according to the answers you get.

If you see that most game theory parameters aren’t met, you know that you have to change your approach. You either need to also act irrationally, which is something I wouldn’t suggest, or you need to step away and find better players or games.

The choice is always yours.

And usually, the winners are the ones who know how to play.

If you enjoy games, you will definitely enjoy “30 challenges – 30 days – zero excuses.” All challenges are picked strategically in order to help you make better life decisions.

Also, don’t forget to subscribe to our newsletter to get our articles in your inbox on a weekly basis. It is free, easy to unsubscribe and some great resources will wait for you once you confirm your subscription.

And if you enjoy video, here is the video essay version of this post: 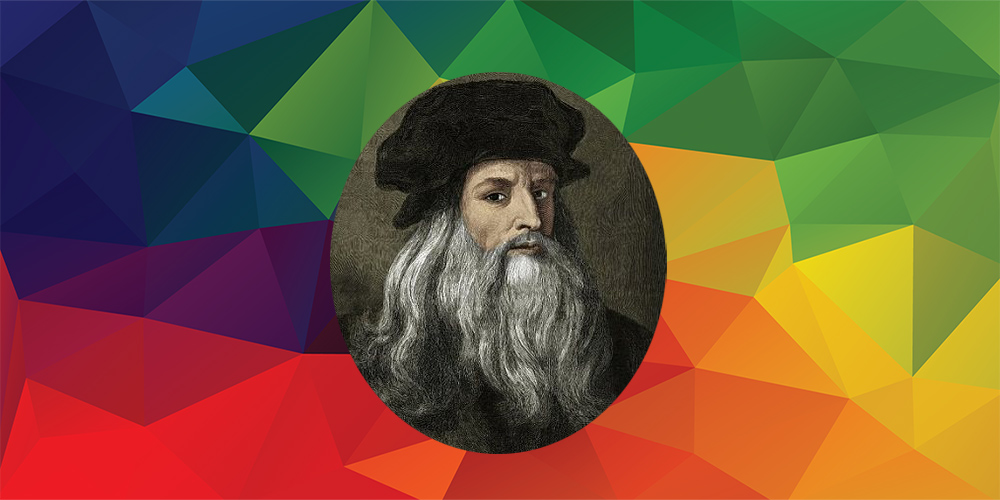 How to Organize Your Life – The Leonardo Da Vinci Schedule

How to Organize Your Life - The Leonardo Da Vinci Schedule   This is an ad hoc post that aims...